The city of Glasgow had a long imperial connection with the West Indies. The first voyages were thought to have departed in the 1630s with Barbados – the prototype English sugar colony – the main arrival point. In this period, the port of Ayr was used by merchants in Glasgow although by 1667, Port Glasgow was constructed in order to take advantage of the deep water in the upper Firth of Clyde which facilitated large scale maritime trade. 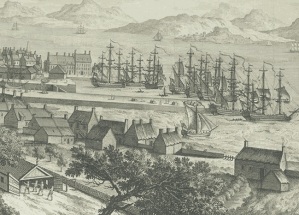 Port Glasgow and Greenock became the city’s satellite ports although most of the Glasgow-West India commerce was undertaken in counting houses near Glasgow Cross. The area west of the cross evolved into the New Town after 1711 and is now known as the Merchant City.

Although tobacco commerce has become  almost synonymous with Glasgow’s imperial history, the sugar trade began before the Union of 1707 and was more important over a longer period. There are no surviving Sugar Houses today, but contemporary engravings recreate the industries in the centre of Glasgow that were dependant on colonial imports. Glasgow developed into a port of international prominence, at one stage trading more tobacco in one year  (1757) than all other British ports, including London, together.

This later engraving shows a bustling Port Glasgow in the 1841. Note the dock-workers sitting on the unloaded Hogsheads (perhaps filled with sugar or tobacco), as well as others taking out boxes of stores (perhaps destined for the West Indies) onto the pier.

Ponderings of a Glasgow historian of the Caribbean